Continuing through Singapore, Elia visits the Rain Oculus and demonstrates the differences between shooting Raw and Jpeg. Elia is tasked with a unique photo challenge in Har Paw Villa. And along with Edward Tian, they shoot downtown Singapore using traditional film cameras before heading to one of the only film processing studios in town.

In this episode Elia pays a quick visit to one of his favorite street food stalls on Clarke Quay. Then, to beat the midday heat wave, he captures a stunning water feature called the Rain Oculus in one of the most beautiful shopping malls in the world–The Marina Bay Sands Mall. Elia breaks down some of the benefits of shooting raw vs jpeg. After that, the Moments director Valentina surprises Elia with a visit to a new location, Haw Par Villa, where he’s faced with a unique and fairly ridiculous photography challenge in one of the strangest places in Singapore.

Elia wraps things up overlooking Singapore Downtown, to shoot from the Peninsula Excelsior Hotel where Edward Adios brings along a collection of vintage Fujifilm Film cameras and an assortment of film. Together they shoot the sunset and blue hour cityscape, side-by-side using both film and digital cameras, before a visit to the film processing lab to learn the steps for developing positive film and ending with an amazing Flickr Meetup in the heart of Singapore. 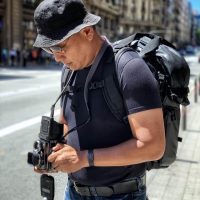 Edward Tian is a commercial Architectural photographer based in Singapore and Taiwan. His photography expertise covers Architecture/Cityscape/Travel and People.

Edward's style of approach is always to find a bold and unique perspective for his viewers. His previous job as a Regional Consultant has brought him to many parts of Asia where he documents the scenery and culture.

He is a Sony Alpha Professional in both Singapore and Taiwan. He also conducts photography workshops during his free time and is a Getty Contributor.

Some of Edward's greatest achievements in his photographic journey include winning the First Prize for the 2013 Marina Bay Countdown Photo Competition and 2014 National Geographic CapitaLand Photo Competition.