Tokyo is a fascinating city for photography and in this episode, Elia explores both the serene and chaotic locations. Along with local photographer Kenji Yamamura, they search for a hidden vantage point in the International Forum where Elia once again beats the tripod police. A special visit is made to the Photo History Museum in Fujifilm’s Tokyo headquarters to interview Sam Minami, the man responsible for bringing Fujifilm’s long legacy of color film to the new area of digital film simulations.

In this episode, the team flies from Kuala Lumpur to Tokyo, Japan. In transit, Elia shares some of his best techniques for getting camera gear packed up and on the plane for international flights. He navigates and gives tips for Tokyo’s sometimes confusing, but well connected, subway system and visits his favorite Japanese garden, Kiyosumi. After some relaxing “nature bathing,” the team follows Elia to another one of Tokyo’s many attractions–Shibuya Crossing–where the crowd itself has become an attraction. It can be an overwhelming place so Elia reveals his favorite vantage point to capture all the action.

As a bonus, Elia visits the Photo History Museum in Fujifilm’s Tokyo headquarters to speak with Sam Minami, the man responsible for bringing Fujifilm’s long legacy of color film into the new era as film simulations in their line of digital cameras. But no visit to Tokyo would be complete without some cityscape photography, so he heads to Ginza for some architectural shots with, Kenji Yamamura, in the Tokyo International Forum Building. He gives us the local scoop on a unique reflection shot that’s somewhat obscure. Kenji and Elia use some non-traditional tactics to capture the “Money Shot” (literally a tripod made of coins) before getting some sushi at one the best Sushi restaurants in Ginza. 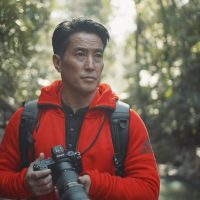 Outdoor Photographer and Founder of Pashadelic

Living in Tokyo. Kenji was inspired by a post card to start taking landscape photography at Big Sur California in Jan 2013. He started taking photos with Shumon Saito and the experience that they took the first Milky Way in California is an important memory for him. He is active on online and has more than 130,000 followers. He believes photography can make people happier. He is also enjoying to photograph his son with a beautiful landscape scenery every month.

After graduating from university, working for a Investment Banking and founded a wedding gift service company with his friends and involved in the management of Chinese biotechnology company. Flew to the United States in 2010. Took a double master of MBA and finance at Hult International Business School. Inspired by the vast scenery of the United States, started a service "Pashadelic" that shares important information of landscape photography.